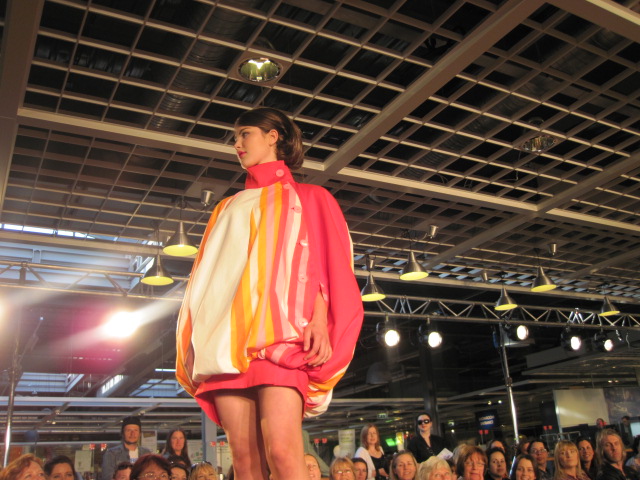 With an estimated 93% of all textile waste in Ireland sent to landfill, rediscover fashion is a spin off – now fashion label – from Rediscover Centre Ballymun. Set up in 2007 its aim is to demonstrate the potential for textiles recycling, reuse and recovery in Ireland and also to highlight the environmental, social and economic benefits.

Yesterday I attended their second fashion show. All the clothes were made from recycled materials. Some from pillow cases, some from ikea waste bins and old restaurant uniforms. Others were made from jeans and old suits. I know for a fact for one piece in particular the material was taken from a skip….

Ballymun now has won 30 environmental awards. In 2008 it was voted Irelands fair trade town. They have also won the Arthur Guinness Fund.

I worked with the rediscovery team last year when we built a recycled garden at the Smithfield festival and of course also when I bought my kitchen chairs from their rediscover furniture revcycling project.

Take a look at what one can do when the imagination is really put to the test. Now pretend I never told you this fashion show took place in Ballymun, in an Ikea store and that some high street fashion label was the designer. In all honesty, I know all of the pieces were for sale yesterday. But I could not tell you whether they would have cost €75 or €1750. I also know diddly about fashion…. but this blew me away and from a green perspective it is exemplary.

I have also covered more the fashion element of this over on culch.ie

any of the these describe you…. ?

are you interested in the greeny garden outdoors kinda thing but don’t want to fall asleep within the first 7 minutes seconds ….? 😉

A bit like the Dublin Twook Club crossed with the photobloggers, but different-ish 😉

Got an idea, suggestion or recommendation….? leave a comment or send an email to info [at] doneganlandscaping [dot] com

my thinking is that:

what do you need:

after that – pop an email to info [at] doneganlandscaping [dot] com or leave a comment below.

If the interest is there – great stuff ! If not – I tried and I’ll probably go for a pint on Friday evening 😉

update on the garden group
http://blog.doneganlandscaping.com/2009/08/20/garden-group-gets-grooving/
leave a comment and say hi 😉
peter