Tag Archive for: why i love 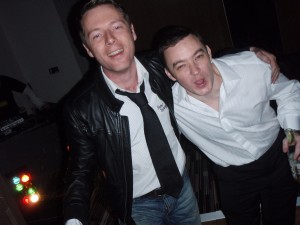 For the moment writer #4 is Damien Mulley. When I first suggested that I do a garden guest slot… suprisingly, possibly, the first person to contact me on twitter was Damien.

He owns Mulley Communications runs the Irish Blog Awards; the Irish Web Awards; writes; speaks; teaches; does tv/ radio on the subject – the list is endless. One might say he is to computers what I am to horticulture. hmmmm….? 😉 That wry wit of mine aside and when with a minute to spare one pretty quickly realises outside of a passion for ‘techie things’ – Damien is, genuinely, a really cool gentleman.

Actually, let’s call this My Mum, Mr. Roycroft and my Nana.
Oh and hello. I’m actually going to talk about three people who encouraged me to like plants and gardening and getting things to grow. My mother was always and still is into gardening and when we lived up in the Northside we had a small garden front and back with really crappy soil. She had roses and lillies and bulbs and all the usuals. She used to then get “slips” off my Nana, her mother-in-law amongst other people and grow loads of shrubs as well as buying the odd few plants when we could afford those luxuries which only happened much later in life.

My grandmother was still very much in the background at this stage when it came to her influence. I used to like helping my mother out in the garden and eventually when I was 6-7 she gave me a little patch of the garden to call my own and I didn’t do too much except rake the tonnes of stones that were in it.

Then in school we got this great teacher called Mr Roycroft who was older than old and I can’t even remember what he first thought us but it was all to do with flowers and plants and so forth. Mr. Roycroft popped up again when I went into 4th class in primary or rather 5th class. I was deemed very bright so as an experiment in the school they took the brightest from those going into 4th year and the brightest of those going into 5th year and they created a new class and Mr. Roycroft would foster all those kids. Best year ever. We learned so much stuff from maths to Geography to Irish (lots of Irish) to nature to botany. Ahhh flowers and plants and things. Roycroft not also thought us the green agenda way before consultants ripped people off wholesale to teach them about it but he also taught us latin by tellng us the latin names of the plants and the families they came from. He then explained what each one meant in English so we had a good grasp of the basics when we finished with him. That year was a very happy year for me in school and was also the last year that I ever applied myself in the schooling system.

We moved house into the country and I lost touch with all my non-schoolfriends. Me and myself and sometimes I. Only kid in the family, big feckoff gardens and instead of a small patch I had the whole wall outside our house and a kind of a rockery which over a few years I expanded and expanded so much so that I started to become the “consultant” about plants at home. I don’t think I was yet 9 at this stage.

Around the same time I became the “chosen one” of my grandmother and grandfather and every Sunday I would be brought along to Skibereen with them, driving down one route and taking the back route home through Iniskeen and Ballineen where we’d stop off at my Nana’s sister’s place. On the way down and back I would basically help my grandmother to vandalise gardens by taking “slips” from shrubs, which if you don’t know what slips are, are small cuttings, though we used to just yank them off. Spring time was worse. That was trowel and bucket time as we dug up West Cork to get Bluebells and Primroses AND very special and rare “wild dafodils”. No idea were they wild or just went native but they had a scent and were big and leafy.

One Christmas I got the very sad (perhaps) present of a propogator and holy crap but it became the best value for money present ever. So I started growing things from seed. Lots and lots and lots of seed. Eventually the parents got a glasshouse which pretty much was for me. Our garden had some fantastic stuff grown for it then. Annuals to start with and then I just didn’t think they were worth all the effort if they were dead at the end of the season so it became perennials and shrubs and that ilk.

There’s not been a lot of calm for me in the past few years but I could literally spend 5 hours in the glass house with a break for lunch and plant seed after seed. I didn’t just feck the seed down in rows, no, I placed each individual seed down and spaced them. A huge amount of work but I enjoyed it.

We moved house again then and at this stage I was in my teens, listening to heavy metal, spotty as fuck but I still grew things, still went out for a bit of peace (no Internet then helped). In the new old house the garden was a heap, the front garden was grass and hedging and nothing more so we got rid of the hedging and threw in a few borders but it was boring. I then started thinking up of proper designs for the Garden and what was needed. The before and after for the front and back are stunning but that’s for another time and another blog post.

I wouldn’t have been able to achieve what I did and learn so much about nature, life and science if it wasn’t for those three main people educating me but more importantly encouraging me to explore. Exploration is mostly not the physical. I don’t do much gardening anymore but I know I’ll go back to it eventually, it’s a strong part of my psyche and always will be. That’s my gardening story, tell us yours.