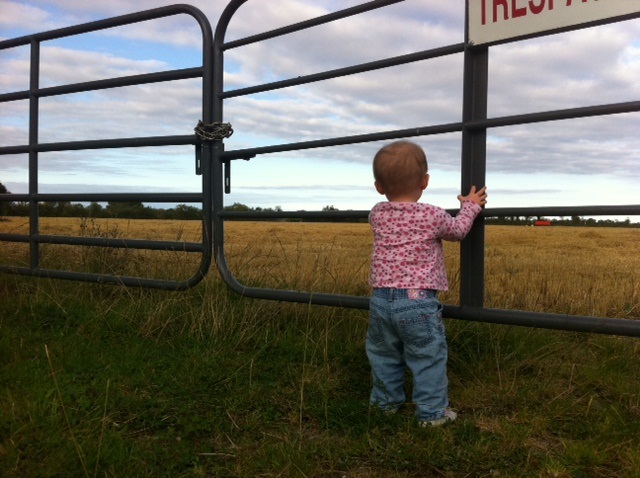 You may want to bring a bag for your pickings and wellies! Any problems simply leave a comment or give me a call. In the meantime these posts may prove useful. 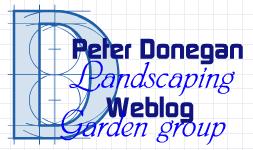 The 6th Garden Group outing takes place this weekend coming Sunday August 7th. The hedgerow walk has been done before but, this time the route should be in full fruit. 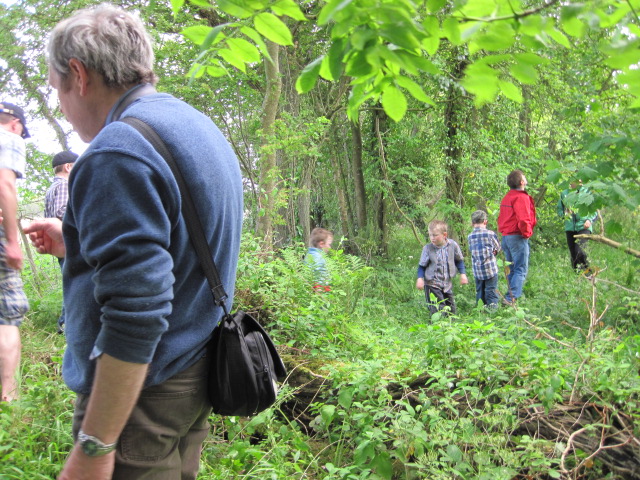 If you use an iphone app for your walks runs – this is was runkeeper showed last time. 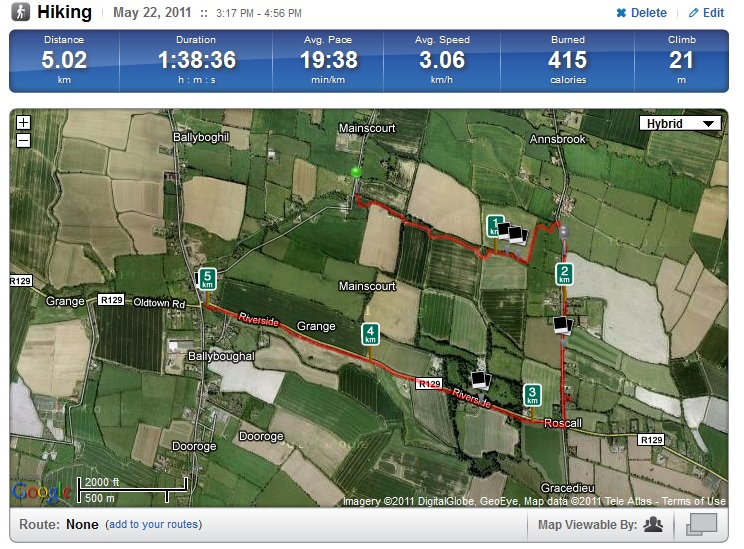 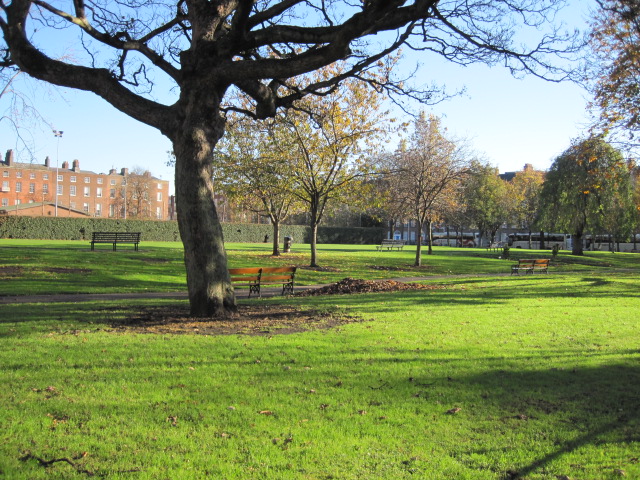 Located in the centre of Mountjoy Square, once Dublin’s premier Georgian area, and comprising 1.8 hectares, this park was originally created by the Developer of the Square, Luke Gardiner, Lord Mountjoy around 1800, as part of his grand concept which envisaged the great sweep of Gardiner Street down to the Custom House.

While the Square was upgraded in the late 1980’s, its full potential as a Georgian Park must await the relocation of the existing all-weather sports area currently under active consideration by the City Council. 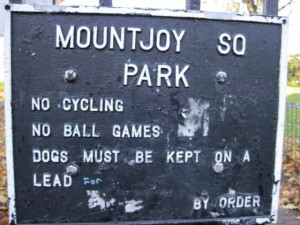 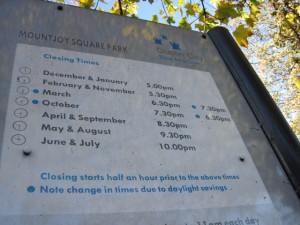 Funny thing is, I don’t know where the pitch or the people who use it would/ could go if the all weather pitch was relocated, that is assuming the park is for the people. That said, I would also like to see it returned to its original concept. But then that’s all very good for me to say. Either or I like the park, although there are bits of it I simply just didn’t get. That said I was happy to be there and enjoyed my stroll. Sincerely. 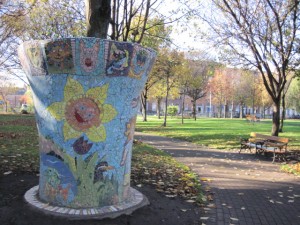 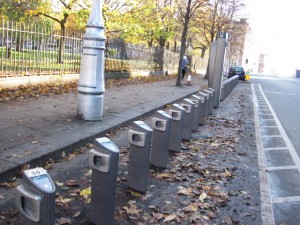 I didn’t like the fact that the gates weren’t open on all sides and the Dublin Bikes Scheme stand was empty. The pottery around some of the trees baffled me but then that was balanced by some new planting and what appears to be a corner of the park for leaf mulch. The play ground was being used when I was there. The more junior nippers were in one area whilst the not so juniors were in the one next to it. The people were friendly and as tourists watched with maps from outside one Mom explained to me how the electronic dance game worked with a quick Mother Daughter demonstration. 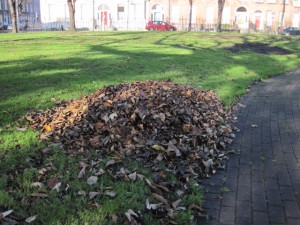 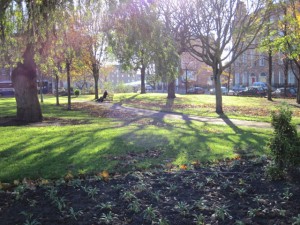 I liked the rambling paths. The sculpt in the middle made me walk up to it… but I’ve no idea what it represents. Sometimes it’s better that way. I liked the piles of raked leaves and wanted to kick them everywhere…. the trees were all pruned and crown raised above head height so one could see everywhere from anywhere in the park. I saw wallflowers freshly planted and the hedges nicely cut screened the football area. 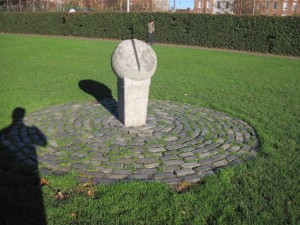 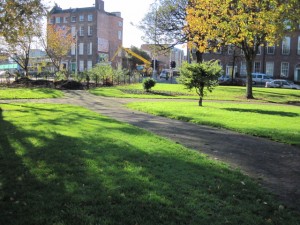 The park does need some extra added attention in no specific area and it seems, at this moment there’s a bit of everything there, which is good, but aesthetically it doesn’t do it justice. That said, I’d be quite proud to have this park on my doorstep.

Mountjoy Square (Irish: Cearnóg Mhuinseo), one of five Georgian squares in Dublin, Ireland, lies on the north side of the city just under a kilometre from the River Liffey. Planned and developed in the late 18th century by the second Luke Gardiner, then Viscount Mountjoy, the square is surrounded on all sides by individual terraced, red-brick Georgian houses. Construction began in the early 1790s and the work was completed in 1818

Mountjoy can boast being Dublin’s only true Georgian square, each of its sides being exactly 140 metres in length. While the North, East and West sides each have 18 houses, the South has 19, reflecting some variation in plot sizes. Though each side was originally numbered individually, the houses are now numbered continuously clockwise from no. 1 in the north-west corner. While its North and South sides are continuous from corner to corner, the East and West sides are in three terraces, interrupted by two side streets, Grenville Street and Gardiner Place to the West and Fitzgibbon and North Great Charles Street to the East. Gardiner Street passes through the West side of the square, while Belvidere Place and Gardiner Lane run off the North- and South-East corners.

Although some of the original buildings fell to ruin over the 20th century, replicas have been built in their place, so the square still maintains its consistent Georgian façade. 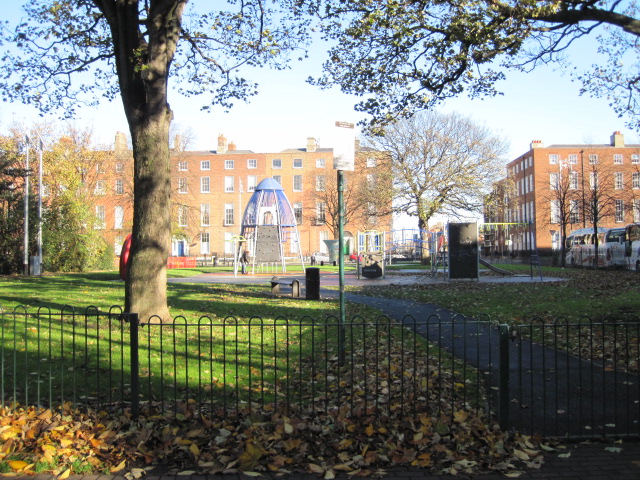 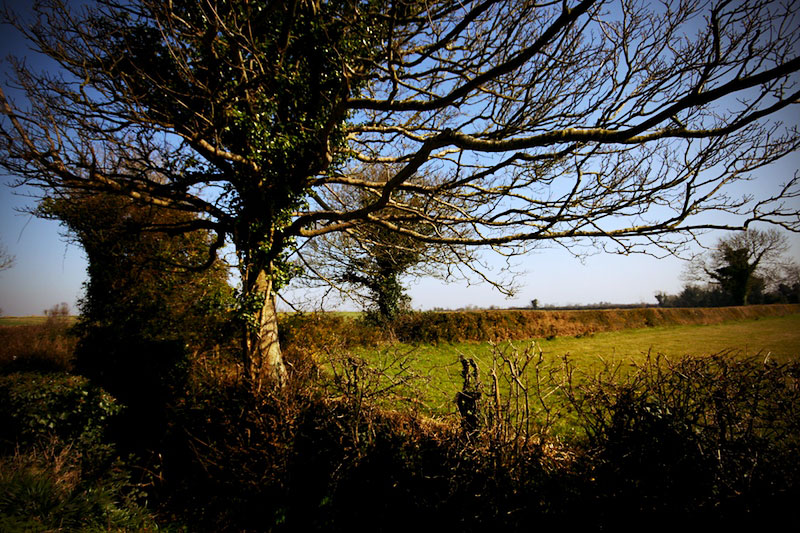 I love the great outdoors. I love it when I am warm…. and outdoors. This day is all about getting wrapped up and getting out and about. There’s the usual reaons as to why being active is good for you but its is also very much from by point of view about nature and actually seeing, feeling and touching it.

It’s autumn. The days are fresh. The colours of the countryside are just spectacular. You should get out there! Why not visit our Discover Ireland website and choose from over 100 scenic looped walks, great forest trails or more challenging mountain trails. There are walks to suit all levels of ability and experience from the relatively easy 2-hour stroll to more challenging 5-hour trails.

I did my own version of this last January around Limerick and Cork and I loved every second of it. There’s also more information at the National Trails Day website. 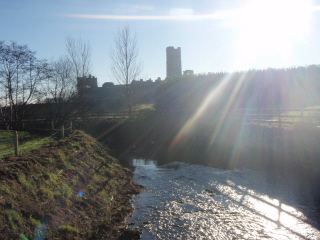 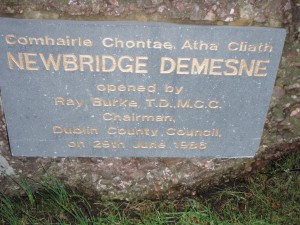 hmmm 😉 there you are Ray… Apart from that, there is absolutely nothing I dislike about the park named Newbridge House nee Newbridge Demense, as it is far more than that.

It is a true gem and I love it so very much. It contains the formal and the informal. It contains the grand house and the relevant farmyard, yet – it also has the most amazing childrens playground, barbeque and picnic areas. But it retains its history and it does it very well.

The tour of the house and farm I have done so many times. The coffee shop does real coffee. If you are looking for a recession buster – this is it! I went last weekend. I brought my flask [of fresh ground coffee] and a picnic. The weather wasn’t great but the grounds looked magnificient.