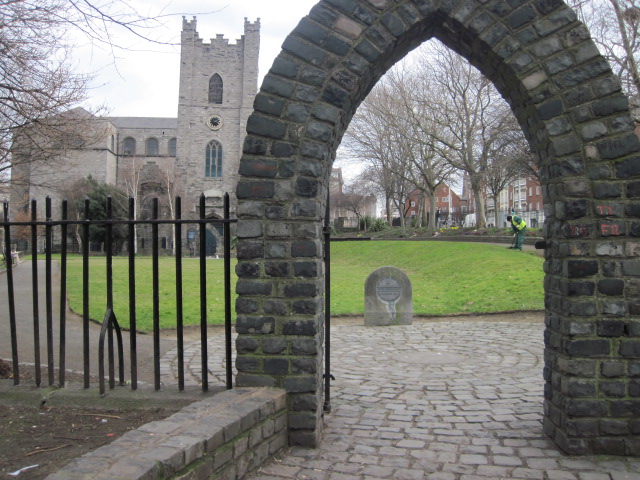 Located on the corner of High Street and Cook Street [just on past Christ Church] St Audoens Park is, I’m glad to say, another of Dublins little gems. According to Dublin City Councils website:

St. Audoen’s Park, although less than 0.5 hectares in size, is quite significant in historical terms.  Located adjacent to St. Audoen’s Church (1300 A.D.), it incorporates the first stone city wall dating from about 1100 A.D.; St. Audoen’s Arch, the last surviving entrance to the old city; and Fagan’s Gate.

The City Wall was restored in 1976 as part of Architectural Heritage Year and the park development of 1982 won a prestigious civic award.  Audoen was a 7th – century Bishop of Rouen (France) and the nearby church named after him is reputedly one of the oldest still used for regular religious services.

As a park, it is extremely relaxing and a great little getaway from the hustle and bustle. The fact that it has so much from a heritage point of view is something that maybe is overlooked a bit too often… But maybe there’s a little of The War Memorial Park versus The Phoenix Park going on here with Christs Church only a stones throw away [?].

That said I like it. Nicely laid out. Clean and tidy. There was even a gardener in trimming the lawn edges on the day I visited. I also like the fact that there’s a Dublin Bike Scheme collection point right outside. I cycled right up from Exchequer Street. The beds were a little empty but I’ll simply put that down to the time of the season… still no leaves on the trees 😉 A note should go also to the stone work cobbles that so often are not in keeping with the surroundings.

Go take a look. Enjoy. Well worth it.