You are here: Home1 / Blog2 / regeneration 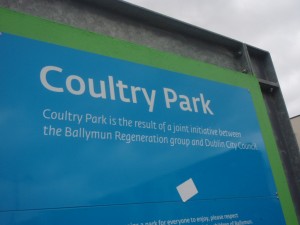 I wouldn’t guess too many know about this park. In fact I’d say very few. I never knew about it up until recently. But I’m glad I did take the time to visit it.

Located in between the new and old Ballymun…. the stark contrast is to be admired. In fact it is to be applauded. Because what I saw was the fact that for the first time in my life a park was built before a building development was finished. The park still has a bit, on the peripherals to go, but its really good. I like it!

What was much more admirable was the little plaques at the base of so many trees. They acknowledged a group or an organisation who donated money and paid for that tree to go into the park.

This is important. Because now a new park is about the people. It tells a story. It has a reason and a meaning, personal to those who will frequent it.

Ballymun regeneration, the people who live there and Dublin City Council for so many reasons will have got this park spot on when it’s fully complete in so many ways.

I’m gonna give this park 3/5 – only because it’s got a bit of finshing to go. That said I would strongly recommend you go here. Visit it. Take your time. Sit on a grass mound and let life pass you by.

What I found most unusual about this place when I went there…. There was about 12 teenagers sitting around talking and 3 kids with their parents in the playground. Not an inch of litter to be seen. Some people associate parks with an older age group… Nice to see re-generation getting a double meaning. 😉