Tag Archive for: Recreation and Sports

You are here: Home1 / Blog2 / Recreation and Sports

Details: Aisling Mc Mahon of the OPW & Site Manager for The Battle of the Boyne site [Drogheda] will give a personal guided tour to the group.

I recommend you read the garden group guide. The two previous trips were to Irelands Eye and the war memorial park. Dena Williams and her family The Garden Group was also featured in the Mail On Sunday recently.

Our Tour will include:

The Walled Garden and Tea Room 2008, this part is the only part that is fully open to the public at the moment. The layout of which is as per the 1808 and later OS maps.

However, by special arrangement, we have permission from the contractors who are currently on site restoring the outer walls, to access their site, subject to certain limits as there are health and safety concerns. We will also see the Octgaon which the group will be able to see pre- restoration.

And… On the day they visit we will also have living history displays taking place for free on the front lawn with people in period costumes firing muskets with gunpowder and doing cavlary displays.

Note of thanks: to Nic Reilly for putting me in touch and to Aisling McMahon for taking my call and arranging this for us.

I have a different gig on this weekend – not be confused! To this one, planning had started some time ago for the garden groups second journey and I am pleased to say we are ready to roll.

Never been on a garden group gig…?

After a late night phonecall with a gentleman called Mark from Island Ferries [4th February] our next adventure will be to Irelands Eye.

Have I ever been there…? No. But from my extensive google research here’s what I have found out.

The ruins of a Martello Tower and an 8th-century church (the Church of the Three Sons of Nessan) are the only signs of previous habitation. The tower’s window entrance 5 metres above ground level can now be accessed by a rope that hangs down from the window. The church functioned as parish church for Howth until recent centuries, eventually being replaced by a church in the village due to the limitations of having to take a boat for every service.

In Celtic times the island was called Eria’s Island. Eria was a woman’s name and this became confused with Erin, derived from Éireann, the Irish name for Ireland. The Vikings substituted the word Island with Ey, their Norse equivalent, and so it became known as Erin’s Ey and ultimately Ireland’s Eye. The island was also known formerly as Inis Faithlenn.

Ireland’s Eye comprises the main island, a range of rocks and an islet called Thulla. The most spectacular feature is the huge freestanding rock called “the Stack”, at the northeastern corner of the island, which plays host to a large variety of seabirds, including thousands of guillemots, razorbills, fulmars and gulls. Ireland’s fifth gannet colony became established on the Stack in the 1980s, and there are now a few hundred pairs breeding there each year. There is a large cormorant colony on the main island, and a few breeding pairs of puffins. Grey seals are abundant in the sea around the island.

The Eye is a townland in its own right, with a registered area of 21.5 hectares (53 acres).

Birdweb.net also have some good reading for those a little more into the nature side of it with some great notes on routes to take and what you can expect to see. I would pay particular note to this line of their writing

It is good policy to stick to the trodden paths as it is only too easy to walk on well camouflaged chicks or eggs.

Places for trip are limited to 18 people. Those who were on the previous Garden Group trip have first refusal and the usual Garden Group Guides apply. 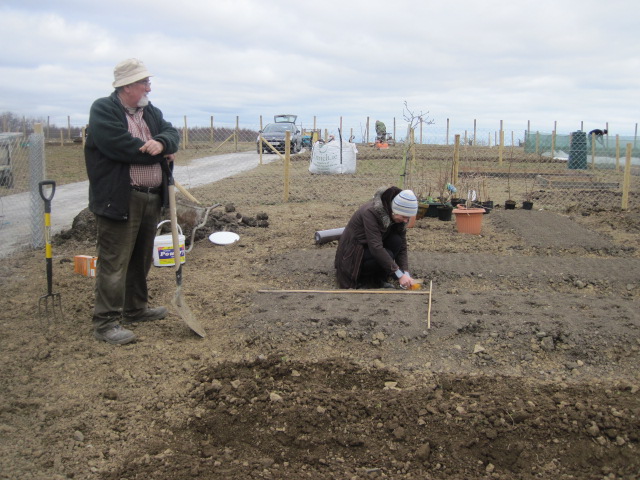 I was talking to Trevor Sargeant at another gig. Trying to find a time that suited us both to meet we settled on meeting at the allotments in Donabate on Saturday morning. However which way it happened we missed each other.

I took a walk around anyway and I have to say I was very impressed with the enthusiasm that was literally brimming out there…. phenomenal 😉

Some were just getting started, others had just short of set up home there…. I’m looking forward to heading back in a few months time to see the transformation form what at the moment is just the beginning of what I can only say is something amazing.

Unknowns to me, the lovely people of the Final Indo printed a blog article – borrowed from the blog here and over the course of the weekend – half the population of North Dublin either rang or called to my house.

UNFORTUNATELY….I am limited to 18 people. And all places for this tour filled after 3 hours. It is closed. Dúnta. Shut.

Nobody apart from those who left a comment on the landscaping weblog are permitted to attend. If you do turn up. I apologise in advance – but as I said I am limited to 18 people at a maximum.This was agreed with the parks department and is out of my control.