You are here: Home / Blog / dublin 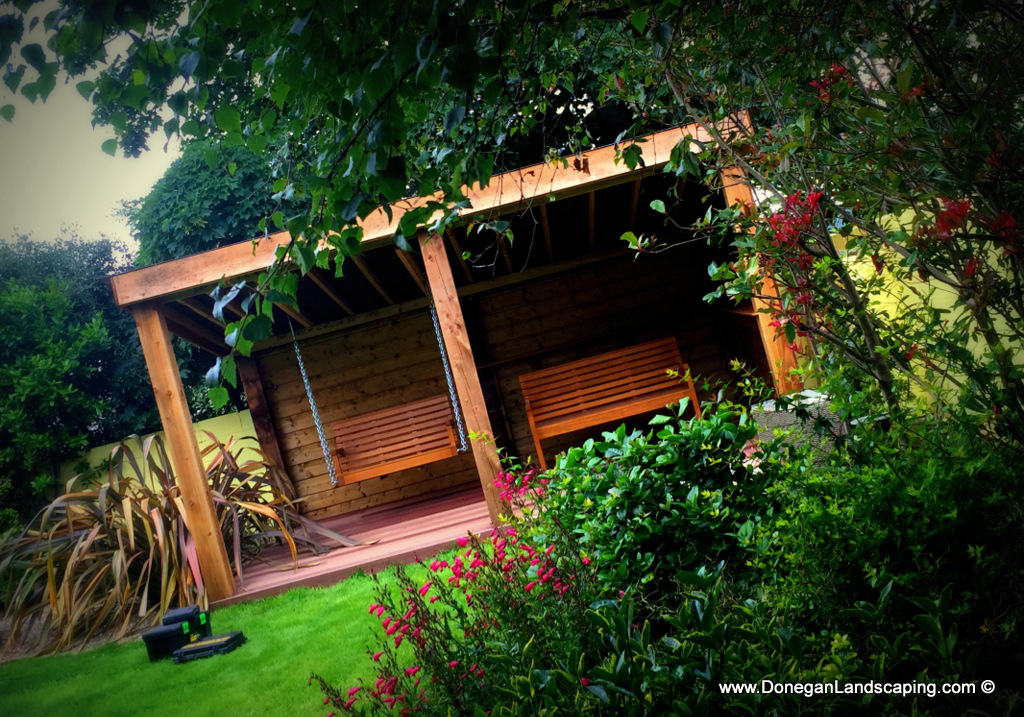 Above pictured the complete garden structure building, one part of an overall landscaping project in Howth, Co. Dublin.

Entirely hand-made and built. It consists of a fully slated roof, solid timber uprights, hardwood deck to the base, surrounds closed in on two sides; one hardwood shelf to the rear right hand side and back; and two hand-made accoya hardwood seats, one of which is a swinging seat; and yes even here I bought the chain and cut it to length etc.

Of note to the lean of the roof, as versus the angle (degrees), the house is 3 story at the back. The video below may show that in better detail.

END_OF_DOCUMENT_TOKEN_TO_BE_REPLACED 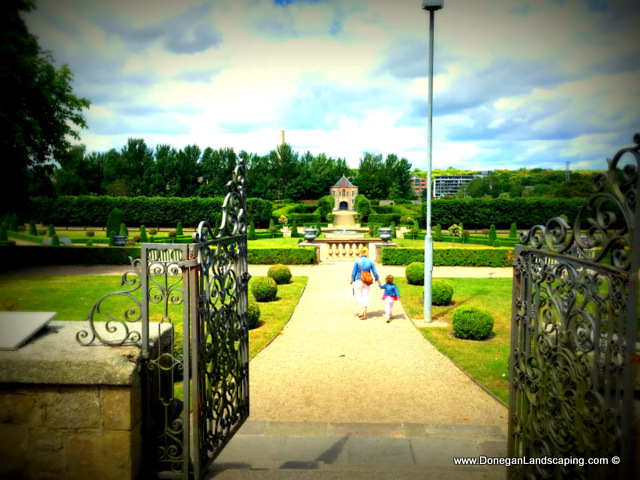 In my time I have spent 6 plus years researching, designing and building 17th Century Gardens and 18th Century that I have won awards for the design and build of. The signatured papers sit framed upon my office walls as a fine reminder, alongside just some of the other gardens I have made.

And though I know I say it often enough, I am honoured that what I love doing is also what I do as my work; if I might call it that. A little like, or the opposite of, an anatidaephobiac running very fast away from a trip to Disneyland, I just can’t seem to help myself when it comes to the great outdoors. On a more serious note, this Sunday past, I was at The Formal Gardens at The Royal Hospital Kilmainham, Dublin; which is also home to the Irish Museum of Modern Art. I visit both regularly.

Further images below of both The Formal Gardens at The Royal Hospital Kilmainham and the Irish Museum of Modern Art.

END_OF_DOCUMENT_TOKEN_TO_BE_REPLACED

I’m all set to teach an 8 week, one evening per week horticulture/ gardening [?] class at St.Tiernans Community School that kicks off October 16th, next Wednesday and I am told some places are still available.

Interested ? See more info and contact numbers below. Give ’em a call or just turn up on the first Wednesday and I’ll see you then.

END_OF_DOCUMENT_TOKEN_TO_BE_REPLACED 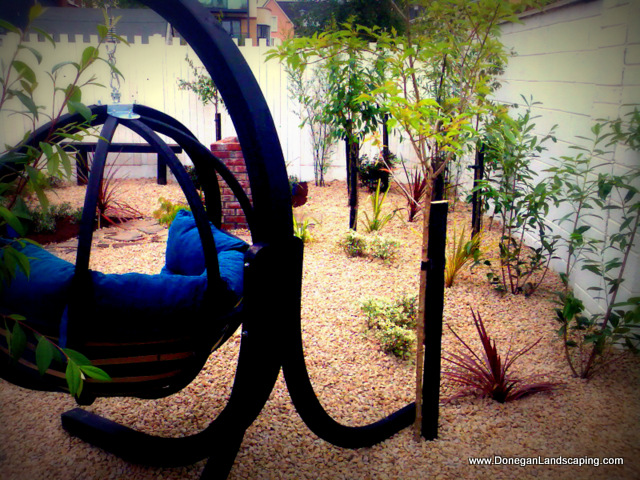 There’s a wee bit of reeling in the years with this garden, but it cropped up [see what I did there ? cropped ? anyhow…] in conversation very, very recently and fair to say this garden and the people I made it for made me smile very much. The best ones always do. 😉

To the gardens advantage you might say horticulturally, there were neighbouring buildings overlooking and almost immediately that allowed the introduction of some younger lower in height growing tress and taller growing shrubs to be planted across the white-painted back wall. And though it may sound funny looking a little closer at the image above, the thinking behind this garden was for it to be of low maintenance. Not car park type zero maintenance, if you get me – just lower.

Wanna see what it looked liked before I got to the tasty bits ?

END_OF_DOCUMENT_TOKEN_TO_BE_REPLACED 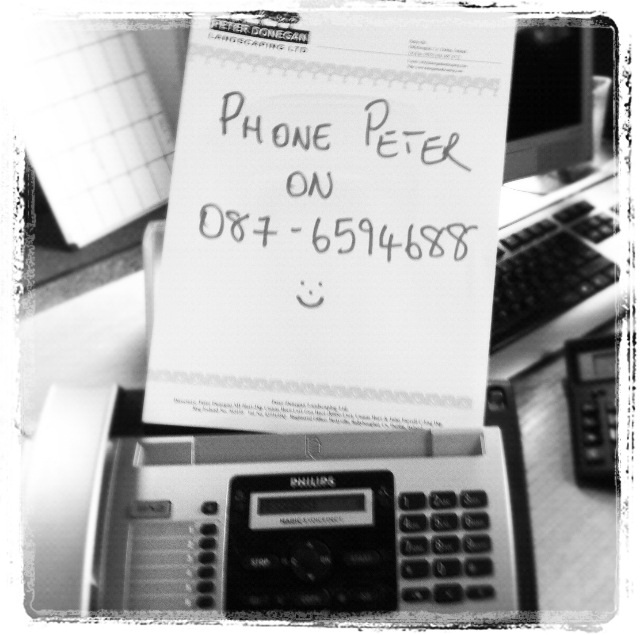 Peter Donegan, Donegan Landscaping or and any variations of the name, has made a unanimous decision to dispense with the landline telephone. The jury voting went as follows: All in favour, one. Against, nil.

When I set up Donegan Landscaping in 2001, I had two landlines. One for the facsimile and 1 for the telephone. Times changed as the fax went by the way side and modern technology allowed me to run them both on the one line. I know, it was called a machine. Anyone remember the telex ?

We’re into an era where things have changed to the point that it is nothing new for me to take a booking via facebook or twitter, never mind a text message. It would also seem that Google is maybe the new Golden Pages.

When I look back on it, when I first set up 14 years ago, I had a camera with a reel of film, partly the reason why so many of my early days gardens are not online. Now, I have very lovely clients that I have actually never met; The Sodshow, that airs on Dublin City Fm has listeners who listen live, online, from The United States of America; and this blog post – this was written whilst having a cup of coffee in the middle of my garden, on my mobile phone, whilst throwing a stick for the dog.

I’m very aware that in years past having a landline maybe gave that extra bit of a trusted feel to a company, but the reality is I am usually outside and not sitting at a desk. And the sole reason I was holding onto the landline, was to get the broadband – which I now get via a dongle.

On a slight side note, I think the biggest change with technology in mind, though I still get my news, is that I haven’t bought a newspaper in over 3 years and I don’t own a television set.

With 7 calls to the landline, 6 of them spam calls ~ In twelve months, it seems people prefer to call me directly and it is you as much as it is me who quite simply just aren’t using the landline any more; at least in terms of getting in touch with me. In context, if it were a piece of machinery I would have decomissioned it a long time ago. I guess it’s simply time to do the honourable and most logic thing. 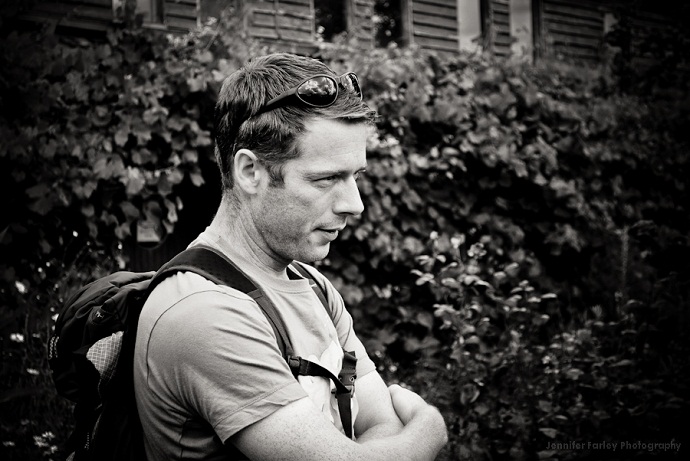