This by Anthea McTiernan appeared in The Irish Times Sunday 5th August 2018.

The Irish landscaper building a war memorial garden in France.
Garden at the Château de Péronne will mark the Irish contribution in WW1.

When he is not constructing a first World War memorial garden in the moat of the 14th century Château de Péronne in the Somme in northern France, landscape gardener Peter Donegan lives in Ballyboughal in north Co Dublin.

“Ballyboughal is a small enough place of about 650 people,” he says. “It’s a farming village. A fine pint of Guinness aside, there’s not a million miles of a difference between it and Péronne.”

The Jardins de la Paix (Gardens of Peace), a series of new perennial gardens dotted around the Hauts-de-France region, will pay tribute to those who gave their lives on French soil between 1914 and 1918, and bear witness to the countries involved in the conflict. One of the gardens, selected to represent participants from Ireland and Northern Ireland in the first World War, is being created in the dried-up moat of the Château de Péronne by Donegan.

The Dublin-based landscaper was selected by a French jury to design the Irish garden in the château, and is currently living in France overseeing the project. He is one of 14 international designers chosen to design nine memorial gardens overall.

The Château de Péronne, home of the Historial de la Grande Guerre, or Museum of the Great War, is a medieval castle dating back to the 14th century, which was badly damaged while under German occupation during the first World War and again during the second. It is the biggest museum in Europe about the first World War.

Donegan is in the process of transforming its dried-up moat, nine metres below street level which was just grass and pathway when he began, into a garden for the people of Péronne, but with an Irish twist.

“The garden is in its simplest form is split into two gardens – the bridge over the moat already achieves this – and one is for family and friends to spend time together, while the other can be considered a little more aesthetic,” he explains.

“The timber seating and tables, hollowed in the centre to allow fruit trees grow up in between and to provide shelter from the sun, are hand made and planed from pine wood sourced as locally as possible, while the 12-metre long limestone seat has been designed loosely based on Dún Ducathair on Inis Mór.” 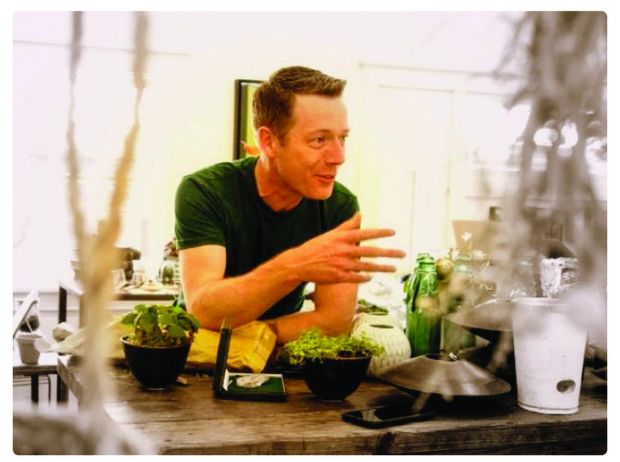 Peter Donegan started gardening when he was five.

Donegan started gardening when he was five, growing plants under his bed. “I was that child who kept on asking why my plants had started leaning towards the light; what I know now, by definition, to be phototropism,” he says.

“I went to the local library to try and find out. That intrigue has never left me. I did my first garden around the age of nine, and after secondary school, studying horticulture was logically the next step.”

That study at the Kildalton College of Horticulture in Co Kilkenny has obviously now paid off. Donegan has transformed many domestic and larger, more dramatic gardens around Ireland, winning several awards from the Association of Landscape Contractors of Ireland (ALCI), including one for Veronica and Paddy Campbell’s 27-acre 17th-century estate in Brackenstown, Co Dublin.

“My love for and education in horticulture has brought me on a lot of varying journeys,” he says.

Donegan plans to have the chateau project completed by October, and hopes this may be just the beginning of his work in France.

“Being selected to represent Ireland to design and build a garden in such a location and for such a reason is more than any other honour I could dream of. It really means a lot when the Irish Ambassador in Paris, Patricia O’Brien, the Irish in France Association, and the Mayor of Péronne personally have taken the time to wish me well,” he says.

“The greatest compliment I can take from this garden when I return next year will be to find wear patches on the lawn; that the sound of the people laughing can be heard bellowing off the castle walls upwards onto the street outside – something that never here ever existed before… When you get to see a person spend time in a space, smile and thank you for what you have done there, it is the most amazing feeling in the world.”

Follow Peter on Twitter at @donegangardens for more project updates and check his blog for more on the story. www.DoneganLandscaping.com