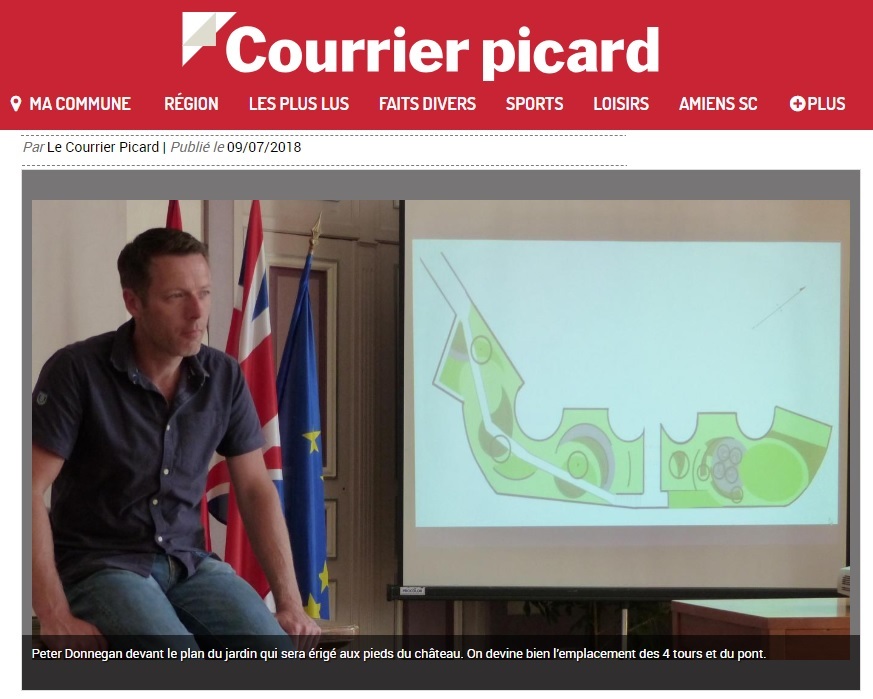 Peter Donnegan (Donegan) in front of the garden plan that will be erected at the foot of the castle. We guess the location of the 4 towers and the bridge.

As reported in the French newspaper, Courrier Picard,

For you, like me who has not the greatest abilities to translate, below a not perfect but enough to understand what was reported.

A Garden of peace at the foot of the Historial de Péronne, at the beginning.

The moats of the castle of Péronne will soon welcome a garden of peace on the theme of Ireland.

I only miss Charles Trenet to sing ” It’s an extraordinary garden  “. Because on paper, it should be.

A garden of peace will be built in a few days in the old moat of the castle of Péronne.

An initiative desired by the Centennial Mission, so that the duty of memory continues after the end of the commemoration of the centenary of the First World War.

It will be funded by the Regional Council and the departments of Pas-de-Calais and Somme. The latter will intervene to improve the lighting of places, via the Gazélec control room.

“This Garden of Peace will be made for families to feel good about it. But the biggest challenge will be to have them come “

His theme will be Irish and was imagined by Peter Donnegan and Ian Price.

The first has been working for seven years on national projects.

Contacted by Gilbert Fillinger, Director of Art and Gardens Hauts-de-France, he came to discover the site: ”  It was not immediately easy to imagine, given the configuration of the castle … We decided to create spaces of four meters by three, in which we plant apple, pear and cherry trees . The families will be able to appropriate these spaces, to pick the fruits directly in the trees. Same thing with the flowery part, where people can help themselves. This Garden of Peace will be made to feel good. But the biggest challenge will be to have them come . ”

What Gilbert Fillinger confirms: “It’s a project for people to get involved, to be a shared place, reunion, exchange.”

This Irish garden will include a wide range of local and regional forest products, as well as limestone benches.

Work should begin in late July or early August, and last about three weeks.

Other Gardens of Peace will be built, notably in Picardy: in Rethondes (French-Scottish Garden), in Craonne, in the Chemin des Dames (Italy, Morocco, Germany) and in the Haute-Somme in Thiepval (Wales and England). ).

And if Emmanuel Macron inaugurated it?

For the moment, nothing is announced on the agenda of the President of the Republic.

But it is conceivable that Emmanuel Macron will inaugurate the Péronne Peace Garden.

He planned to tour the places of memory for 4 to 5 days, during the commemoration of the centenary of the Armistice.

From the East to the Hauts-de-France, from Verdun to the Belgian border, he will gather at various places.

It is also planned to inaugurate one of the 16 proposed Peace Gardens. Which ?

That of the Historial de Péronne will be the first to see the day, at the beginning of September.

Two other gardens will be erected in Thiepval, but President Hollande having already visited the site on July 1, 2016, there is almost no chance for Emmanuel Macron to come back.

From there to imagine the visit of the President of the Republic to Péronne during the first fortnight of November, there is only one step … What do not want to go yet the elected and Gilbert Fillinger …

Waiting to be introduced by The Mayor of Péronne, France & Gilbert Fillinger of @art_jardins & being translated at City Hall presenting the garden for Peronne Castle. pic.twitter.com/aUzxztCSTm