More commonly known as stonecrops, Sedum are a genus of around 400 species of mainly succulent annuals and evergreen, semi-evergreen biennials, perennials, sub shrubs and shrubs a few of which maybe found in the genus Hylotelephium. Mainly found in the Northern Hemisphere some are from the arid areas of South America. Sedum are very variable, with alternate, opposite or whorled, fleshy, cylindrical or flattened leaves and usually terminal, often compound, cymes, panicles or corymbs of generally star shaped and 5 petalled flowers, borne mostly in summer and autumn. Grow hardy species in a rock garden or at the front of a herbaceous or mixed border.

This raised green roof garden was built as part of an overall landscaping project and is quite simply just one part of that. 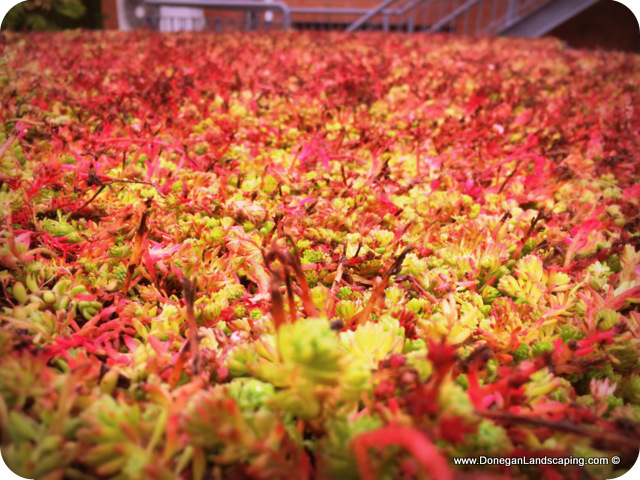 By way of offering some form of definition that is not of my own words, Wikipedia describes a Green or Living Roof as:

a roof of a building that is partially or completely covered with vegetation and a growing medium, planted over a waterproofing membrane. It may also include additional layers such as a root barrier and drainage and irrigation systems. Container gardens on roofs, where plants are maintained in pots, are not generally considered to be true green roofs, although this is debated. Rooftop ponds are another form of green roofs which are used to treat greywater.

Green roofs serve several purposes for a building, such as absorbing rainwater, providing insulation, creating a habitat for wildlife, increasing benevolence and decreasing stress of the people around the roof by providing a more aesthetically pleasing landscape, and helping to lower urban air temperatures and mitigate the heat island effect. They effectively utilize the natural functions of plants to filter water and treat air in urban and suburban landscapes. There are two types of green roof: intensive roofs, which are thicker, with a minimum depth of 12.8 cm, and can support a wider variety of plants but are heavier and require more maintenance, and extensive roofs, which are shallow, ranging in depth from 2 cm to 12.7 cm, lighter than intensive green roofs, and require minimal maintenance.

There are some parts of note to this raised green roof garden.

The latter of the three points above in mind above, I find the growing of the plant is better understood by first also understanding the type of plant (in this case of Sedum) that was chosen to grow, here; and also and equally as important the conditions in which in would be growing. 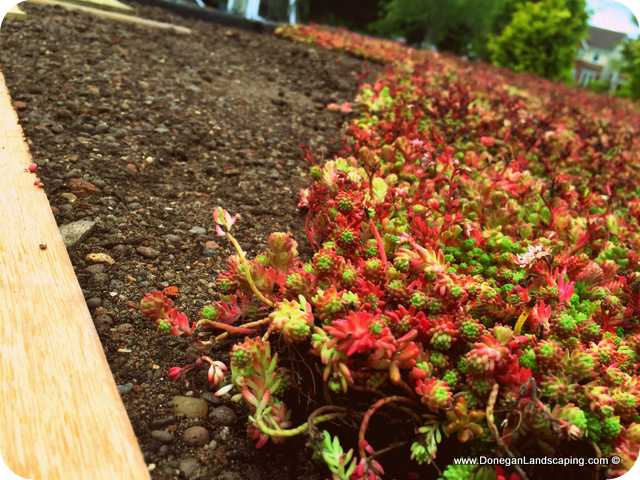 coming from the Latin word sucus, meaning juice, or sap and sometimes known as fat plants, succulents have some plant parts that are more than normally thickened and fleshy, usually to retain water in arid climates or soil conditions and plants may store water in various structures, such as leaves and stems. Some definitions also include roots, so that geophytes that survive unfavorable periods by dying back to underground storage organs may be regarded as succulents. In horticultural use, the term “succulent” is often used in a way which excludes plants that botanists would regard as succulents, such as cacti. Succulents are often grown as ornamental plants because of their striking and unusual appearance. The habitats of these water preserving plants are often in areas with high temperatures and low rainfall. Succulents have the ability to thrive on limited water sources, such as mist and dew, which makes them equipped to survive in an ecosystem which contains scarce water sources.

All of the above in mind, what one realises is that above head height, drainage provided in mind, there really is not much of an ability to store water, as a ‘normal’ garden plant would; and that the more dry arid conditions are being provided. And that outside of the 3″ depth of growing medium provided, (for propagation at least) 2 parts of that would usually be of a grit base. Conditions correct and in place, the timing of the lift of the plant, it’s transportation, handling and relaying are pretty much vital in its re-establishment and knitting in.

Any Q’s. Leave a comment below or find me at: