I’m not too sure where the expert and celebrity speaker title came from, but it’s in the press release [see below] and who am I to argue with that ? 😉

My not so good sense of humour aside, it was an absolute honour to be asked to speak at this years Clare Garden Festival 2014. And, apart from the fact that I love the place (and the craic) and the people there are just fantastic; I missed the gig for other work project commitment reasons last year and horticulturally that sort of got to me, horticulturally.

The reports that came in from 2013 suggest that the show is a cracking family days entertainment and of note credit where it is due, entry prices are pretty damn good value.

Let me know if you’re heading, cannot wait. Year 2 of the nouveau Electric Picnic (a festival that began in a field…) of Irish Horticulture has just been reborn. And that, is a great thing. Also: If anyone from Dublin is headed and though it may be a little covered in compost, I’ve a spare seat going in the jeep.

Pay at the gate:

The Festival is being held at Ennis showgrounds on the LAST SUNDAY in April and is run in partnership with Co Clare Agricultural Show Society at their premises of Ennis showgrounds, just off the M18. Of note Clare Garden Festival is proudly supported by Larkin Polytunnels and Flynn’s Pharmacy. Fair play to both of the main sponsors for digging a little deeper.

Copy and pasted direct from the press release:

Appealing to younger gardeners and to those young at heart will be Peter Donegan who is a regular speaker on the horticultural circuit and presents Dublin’s only garden radio show and podcast, The Sodshow. Peter began gardening at age of 5 and has been exploring the topic from all angles since. He studied horticulture for 4 years and all the while working and learning from the ground up, Peter moved from teaching horticulture to landscaping in London before becoming head of grounds for Dublin City University. After leaving his post as Contracts Manager in Dublin, Peter moved to Scotland to work on garden design and consultancy. In 2001, aged 24 Peter returned home to set up Donegan Landscaping. He has since won a host of awards as both designer and contractor for 17th and 18th century gardens and show gardens at National competition as well as at Bloom. 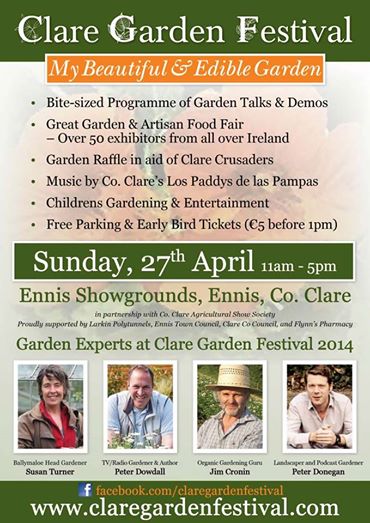