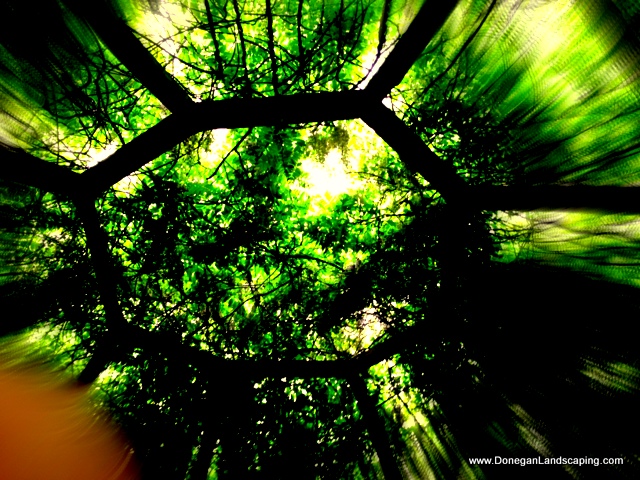 Pictured Above: taken from inside, the roof structure of the gazebo at Lucan Park

As bustling places to unwind go, Lucan Village Park is an absolute gem of a spot that I cannot recommend highly enough. I’ll grant you horticulturally, it is far from the Botanic Gardens, but then what public park isn’t. And that in mind if, there were a parks leader board scored solely on we know what tasty plants are, this space would be up there with the best of them.

I was doing a composting talk in one of the local schools and with an hour to burn and my lunch box and flask in my arsenal, I was so happy I stumbled across this stunner of a little haven. I just wish I could have stayed there longer.

The 0.2 hectare space is noted as part of the 200 acre Griffeen Valley Park and boasts some real gems of mature trees like the Horse Chestnut, Willow and Birch; some with wee little secluded seating areas added to them right by the water sounds edge. It’s piece de resistance however is a stunning gazebo type structure [pictured from inside above top] with an almighty whopper of a Wisteria that was in full flower whilst I was there. Fair to say, I haven’t seen one that impressive since I was landscaping in London some 19 years ago. And if memory serves me right, that one was owned by the Sultan of Brunei.

Lucan’s oldest park is further gifted by the fact that the River Griffeen runs right through it and that, the sound of water flowing, in any form of urban landscaping is something that no amount of money and manufactured installs will ever replicate.

If you have got a large space like an office or hospital type grounds, for example, this might not be such a bad place to go to seek a little inspiration; if you have no garden or are thinking of making one highly recommended you bring the kids and the picnic and stay there a little longer than I could. Fair to say, if The Indo had delayed Marie’s article by about 3 months and referenced this place, I might have agreed.

Of note and full credit to South Dublin Parks Department was the attention to detail in the grounds maintenance, the newly planted Japanese maple, the roses in flower, how clean the areas by the emptied bins were [I used to work for OPW parks – I know the checklist] and the fact that the place was overall pretty damn sparkling ~ had it not been for the wind and the flowers of that darned stunner of a Wisteria.

Go there. Enjoy. Look at in differently. Like that pixelated art gallery scene from Ferris Buellers Day Off. It’s much better that way.