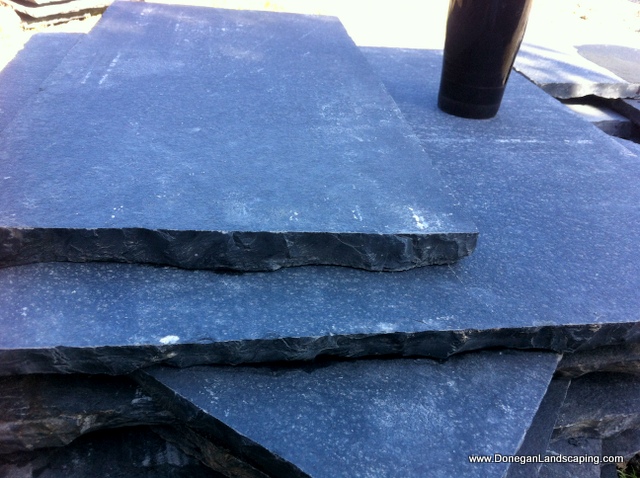 Albeit used in a totally different context, I had noted this stone before when I used it on another garden project. Fair to say, I really, really like this one. What I had noticed however was that the stock images used by the stone companies all [generally] tend to show it with a high gloss finish. Like a new car in a show room. And really they should show you the images with ice cream and crisps and wailing kids squished in the back seats bawling whilst you are stuck in traffic; or something like that.

And you’re back in the room….

That finish, as a by the way is usually achieved by using a spray on mild acid and then treating with a varnish or by using a, recommended by the company,  preparatory stone impregnator. Personally, I’m not a fan of treating any natural stone  and no matter how much I toss it over in my head it just doesn’t seem to make sense. To me, It’s a bit like them tele-visual super stars that get botox. And sure, it’s still Mary… but doesn’t she look a little fake, or plastic or her face won’t move, or whatever. You get my drift. Either or, it becomes just not natural, anymore.

If I’m really honest, I don’t even like cutting the stone. In fact, I try as best and where possible never to cut any natural stone. In that and in my child like imagination, I always describe it as a sort of Captain Caveman with a big bolster chisel and him splitting a gigantic bolder right down the center. Pause it…. now picture the finish on the inside of the fictitious bolder and then contrast it with a machine fine-cut finished edge, or a manufactured not man-made patio slab. Or like cutting the crusts off your toast in the mornings. And why would you want to do that ?

Back to the stone itself…. I’ve said it now so many times, the beauty about the black limestone is when the rain hits it and it changes colour from a matt black to dark gloss and then again as it dries. And it never ceases to make me smile. Isn’t it a beautiful thing to get excited over something as simple as rain droplets on a stone surface ? 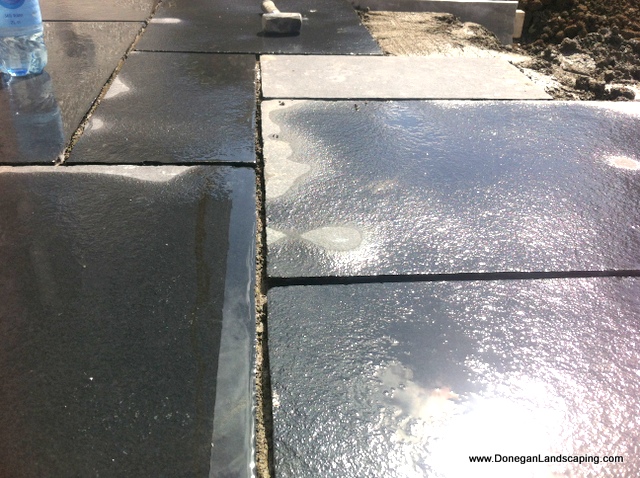 If you scroll back up to the first image what you may also see is that I’ve used a grey limestone as footing between the step. I thought it a lovely tie in between the path that runs left and right off the side of the patio.

Far, far more important than that, the black limestone is quite simply and understatedly so very, very tasty.

The next step now is to change this patio from a nice part of a house into a nice home and that will come down to the planting I choose that will dapple, scent and soften and make one want to stay there far longer than they had ever intended, without even knowing.