Blog
You are here: Home1 / Blog2 / All Posts3 / Sowing the Right Seeds 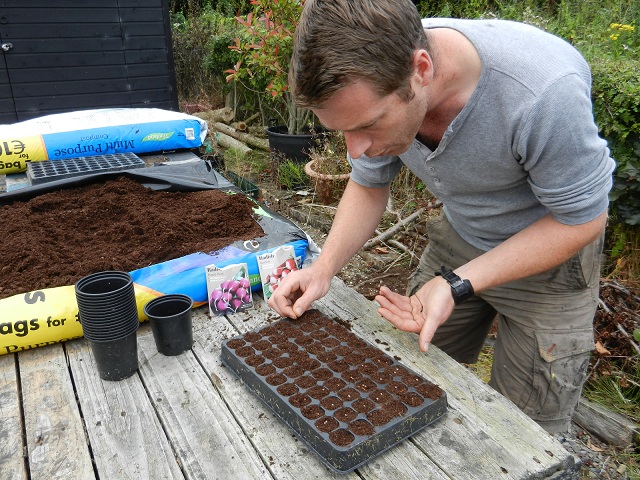 I went out looking for seeds this week, primarily as I had built some raised beds for a client and being that my qualifications are horticultural….. I told Mary [not her real name]

Sure Mary, of course there’s loads of stuff you can grow at this time of year….

Except when I visited my first port of call, the seed racks had been removed. I asked Jim the salesman [not his real name] what had happened…

Ah Peter…. nah we get the rep to remove the whole lot once the kids go back to school….

In conversation with another garden related business owner it seems this was the done thing.

I didn’t think people would be interested Pete….. at this time of year and all

In between all of this another client called and explained to me that she had bought seeds in a garden centre. I dropped by for a cuppa and we had a chat. The seed packets were shown to me and all appeared well until I realised one of the purchases were in fact Pumpkins. I read aloud….

And as I wondered the seed selling stores for myself in search of some inspiration, I saw this was not just a one off. I get the point where a sale is a sale, but why would I buy seeds, that are not sale price reduced, just in case you might ask, that I can do nothing with for six months. Pointless. But still this lady, Mary, had just spent over twenty euro on seeds.

Side-tracking ever so slightly, last year when the weather was oh so bad, I will admit that I grew Beetroot [variety boltardy] seeds on my kitchen window ledge – but that was just an experiment, albeit a messy one from an indoors perspective – to prove the back of the packet theorists entirely incorrect. The sowing time recommended as a by the way should be March to July. Whereas I sowed them in December with outside temperatures of minus eighteen celsius.

But it is to this point that I refer to the factors required for the growth of any plant.Put simply they are light, air, a suitable temperature, a suitable growing medium and water.

Knowing these is hugely significant as the elimination of any one of them will also cause the demise of any plant. In short if you prevent light getting to a plant – it will kill it. Hence and now you know why bark mulch may only somewhat prevents weeds from growing.

Back to the beets, what I had done was given the seed a suitable temperature [inside], sown the seed in compost, watered it and there was enough light in the room for it to be able to photosynthesise. I was also able to breath inside, so the air part was I assumed [correctly by the way] also take care of.

But it leads me to the point that with seeds and the packets in which they come in, it is very much the case that you can grow anything you want, at any time you wish – so long as you give the plant what it needs to grow.

To that and to an extreme hypothetical example – at the very least from an Irish perspective – should it be eighteen celsius in December I could grow Beetroots very easily. Again I refer to the back of the packet and Mary’s dilemma of having nothing to sow after all of her purchases.

The reality is I never paid attention to the back of any packet. Never. At present I have runner beans growing and for the purposes of this article I am not even going to check the recommendations as I already know I [apparently] shouldn’t have sown them about ten days ago. But if I get two pods – I’ll be a happy camper. Anything more than that and you are invited to my home for pea soup with extra added peas.

I am however smart enough to realise that there is a point where I shouldn’t push the boat too much against the tide and I know the annual getting into trouble  routine for storing seeds in the kitchen freezer is quite shortly on the horizon.

My excuse for freezing the seeds is vernalisation. A word that is more synonymous with bulbs.

Vernalisation is the acquisition of the competence to flower in the spring by exposure to the prolonged cold of winter.

Like I said it’s my excuse and I’m sticking to it. On that note bulb planting season has arrived. If you fancy doing so there are six that I recommended on The Sodshow, the garden radio show and podcast that I present.

Tulips, Daffodils, Iris, Crocus, Allium and of course the first bulb I ever purchased and grew at just seven years of age the Hyacinth.