Listen to the original audio as it aired on The Sodshow April 1st 103.2 Dublin City Fm

And to my review of Jane’s book…. 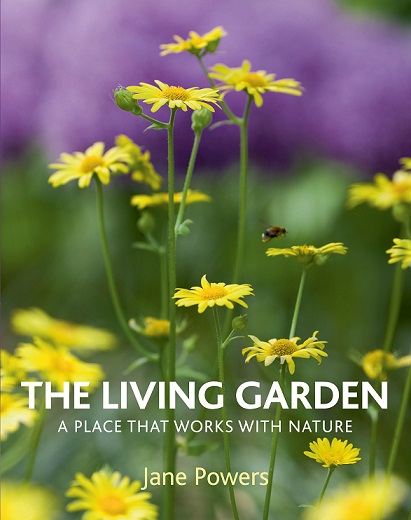 Before I begin my review of The Living Garden, I must admit that I know Jane Powers. Who doesn’t, this is after all Ireland you say and Jane has been writing gardens for The Irish Times since ’97.

As to my knowing her better, Jane is a regular guest and contributor on the SodShow, the garden radio programme I present.

It has been a long time since I reviewed any garden books. Like ’80’s music I got quite bored. A bit of the same old same old, you might say. But this review is not the place for more detail on that, although, it does pose relevance to the reason I like this book, a lot.

The first thing I noticed throughout Jane’s writing is that she refers constantly as I, the singular, her, the individual – the gardener of her own garden. And it is from there that I get a better insight into what, how and why Jane gardens as she does. I can disagree with her as I read. Or agree. With her. I have done both before and will most likely do again. My point is that this is not a cook book. It is not a series of menu’s. And neither is gardening. This is Janes way of gardening as she does it, for real and it is written and explained in that manner.

On a slight side note, I was in touch with Jane Publishers looking for some images, Fabio emailed back asking me to ensure that: author and publisher are clearly stated. I replied asking for some info on the photographer [?] so as to give credit to. I got this note:

All the photographs I sent through were in fact taken by Jane Powers herself, and are © Jane Powers 2011. Let me know if you need any further info.

Now we’re on the same wavelength. You see I know Janes garden. I also know after 4 years writing this blog you can’t set up nature for a great photo shoot. Sometimes you were just there. And Jane as versus any other photographer was. Greater than that, it backs up what is in text format.

I love the oddball yet relevant and logic elements of the book. Jane’s plea to save the clothes line, a note on avoiding the Leyland Cypress, a crash course in thinking about vegetables. There’s a title called things that slither in the night – slugs and the like – it comes with a sub plot called strategies. It speaks logically about hens, about them getting on in life and gets you, to think for yourself, before, during and whilst you garden. It doesn’t assume I and you have a degree in horticulture.

Not to sound so grand, but I have studied horticulture. I have plant dictionaries, albeit very useful to me they are the worlds most boring books.

Similarly, I have always analogised explaining gardening with being thought poetry in school. One can tell me what the poet is thinking, the theory and theme of the poem. Or one can read me poetry, allow me to enjoy or not the tune being read and allow me to think for myself. Rather than being able to recite, I want to first understand. We may all be gardeners. But we will never know it all.

Potential or expert, Balcony or Estate, The Living Garden – is – a bible for those who may wish to begin gardening and a problem solving, idea generating, creative mind stirring directory for those who have a garden. More than that it is a genius piece of reading for those who, like me, enjoy gardening.

Nice one Jane. I enjoyed that 😉

Here’s the opening paragraph from the press release. In this I refer you to its closing line:

In The Living Garden Jane Powers writes entertainingly and expertly on how we can manage our plots – big or small – in a way that is both welcoming to wildlife and good for the rest of the planet. By cutting out harmful chemicals and using the right plants for our climate and conditions, we can make a garden that has a life of its own, in which flora and fauna are intricately interwoven.  Jane describes, in her lyrical but commonsense writing, how to plan and plant for birds, bees and other creatures (including humans); and how to grow our own food, look after our soil, make compost and plant potions, sow and save seeds, propagate plants and carry out other essential tasks.  She is in favour of sustainable, eco-friendly methods, but is realistic about her limitations.

The book is priced at £25. I don’t know what that is in Ireland/ euros. And is all good book stores now.

Also worth a read is Jane’s blog – one bean row

You may also enjoy this interview I did with Jane from 2010:

My Daffodils. Please Take Some. Growing Onions
Scroll to top