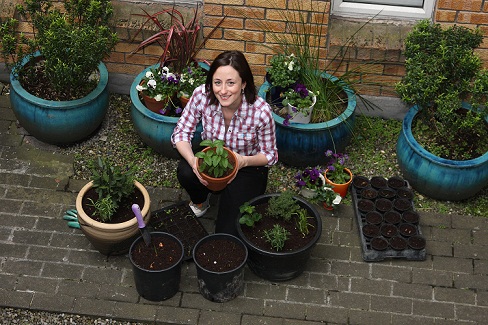 It was the last course I did in grow your own and Susan Daly came out to my home in Ballyboughal [North County Nowhere, Dublin] and did the grow your own class. She then covered it in Mondays [may 10th] Irish Independent in the features section.

As disclaimers go…. Susan didn’t get a free spot to cover the class. She rang me two days before however to book herself in. If she wasn’t covering it for a newspaper I might have given her a free spot. For the sole want of getting a photo of me hugging a tree in the piece, I did however brush my hair parting to the left that little bit better and she did have an extra mug of coffee 😀

here’s the piece in full – I really want to do the course in the Wicklow mountains. I’m about half way down in this article.

Read Susan’s Blog – well worth a browse. The hair parting did nothing for me. 😉 It came under the title Apocalypse Postponed in the newspaper. I put the bit mentioning the GYO class in bold type below.

How to fend for yourself

Self-sufficiency is the buzzword in these challenging times, so Susan Daly gets a few lessons in fending for herself 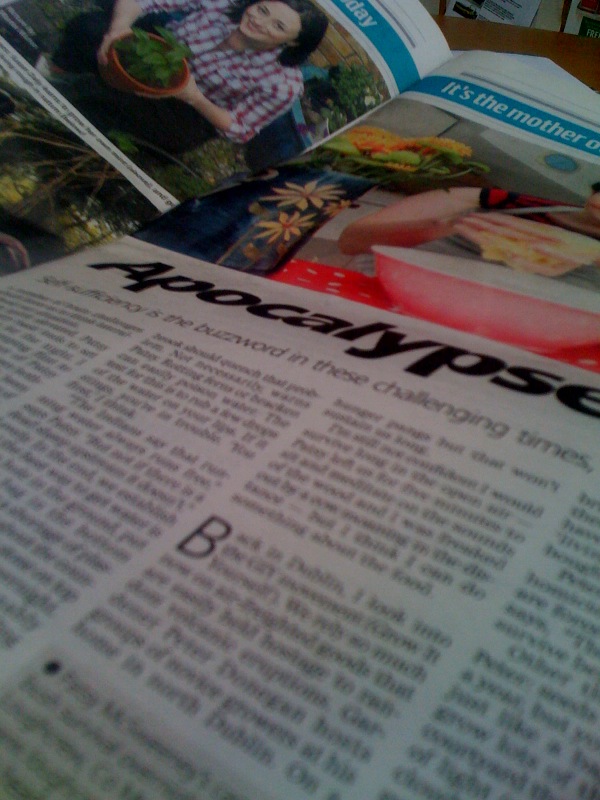 No-one knows what the future holds, especially now that it’s obscured by a cloud of volcanic ash. The view from here, such as it is, isn’t brilliant.

On the bright side, some folks have never been happier. ‘Survivalists’ are people who firmly believe disaster, manmade or otherwise, is just around the corner and make preparations accordingly. For them, making a nuclear shelter and laying down 10 years’ worth of bottled water and tinned sardines is just common sense. They’re only waiting to be proven right.

Digging a bunker in the back garden might be overkill for most of us, but there are ways in which we can better prepare ourselves for difficult times, fiscally or otherwise.

Always the pessimist, I decide to deal with the worst-case scenario first. I’ve always wondered: How would I cope if I was plonked in the middle of nowhere without shelter or even a drop of water?

My first reaction would be to cry. Copiously. My second would be to ring up former army sergeant Patsy McSweeney (presuming my mobile still worked).

Patsy, whose hobbies include camping out in the Wicklow Mountains in snow without a tent, teaches bush craft survival courses at Loughcrew Estate in Co Meath. He takes one look at the way I’m sitting on the ground while listening to his instructions and immediately he can tell I’m a namby-pamby city gal.

“Always get something between your backside and the ground,” he says, “Even if it’s to sit on your heel. Otherwise, you’re on the quickest route to freezing yourself.”

Sir, yes sir. This is not my world, it’s Patsy’s, and I’m as helpless as a baby. To get me and two similarly soft pals in a more ‘survivalist’ state of mind, we are sent off to skim the tree tops on a sky-high zipwire. Physically exhilarated, we are then posed a number of brain challenges which force us to think laterally about our situation.

Team spirit elevated, Patsy gives us very basic tools to set ourselves up for the night. I cheat with a camping flint to start a fire. A piece of Patsy eccentricity that has been bothering me all day — he’s been picking bits of sheep wool out of barbed wire and stuffing it in his pocket as we walk — suddenly makes sense. It is perfect kindling to get the flames jumping.

The shelter is less easy to bluff. In the event of a ‘forced bivouac’ — sleeping outdoors without a tent, to you and me — this is the first thing to be sorted.

We get the basics assembled, a large stick laid like a crossbar across two branches and a lean-to of layered pine fronds. I feel like Bob the Builder without my little digger, carving out a catch-drain in a semi-circle with a stick to lead groundwater around and away from our precious shelter. Digging the latrine downwind is, mercifully, someone else’s job.

All of this is thirsty work. I am deluded from a childhood of reading Famous Five books into thinking that a nearby babbling brook should quench that problem. Not necessarily, warns Patsy. Rotting ferns or bracken can easily poison water. The test for this is to rub a few drops of the water on your lips. If it stings, you’re in trouble. ‘You first,’ I think.

“The Indians say that running water always runs free,” says Patsy. “But not if there is a dead sheep upstream it doesn’t.” Lovely. In the end, we establish that the best way to get water is to dig a hole in the ground, put a plastic bag in the bottom (there’s never a shortage of plastic bags blowing about the countryside, sadly), put a stone on top and let water gather overnight.

Rainwater is reasonably clean, and if needs must, boiling lake water twice is an option. Little tip: A twig with the bark scraped off, thrown into water as it boils, helps draw impurities and the smoky smell from it.

Food is an easy trout from a lake, scraped out in a stream and baked over a frame of sticks but, if we’re honest, we’d probably all die in a post-apocalyptic landscape. Surely the wildlife would be wiped out? In the event, nettles and dandelion boiled into tea is good for hunger pangs but that won’t sustain us long.

I’m still not confident I would survive long in the open air — Patsy left us for five minutes to sit and meditate on the sounds of the wood and I was freaked out by a cow moaning in the distance — but I think I can do something about the food.

Back in Dublin, I look into the GIY movement (Grow It Yourself). We rely so much now on air-freighted goods that are easily held hostage to random volcanic eruptions. Gardener Peter Donegan hosts groups of novice growers at his home in north Dublin. On a bright April morning, I head up there with the knowledge that I have killed every one of those ‘living herb’ plants I’ve ever bought in the supermarket.

Peter relieves me of my plant-homicide guilt. “Those things are force-grown and leggy,” he says, “They are not meant to survive beyond a few days.”

Other things I learn from Peter: seeds have a shelf-life of a year, but you can freeze them just like a bag of peas; I can grow lots of things in my tiny courtyard that never sees a shaft of light (solar panels work on cloudy days — so does photosynthesis); mint is invasive and should always get its own pot.

He also makes me squeeze a fistful of wet compost in one hand, and a dry fistful in the other. “People are afraid to get their hands dirty, but you have to get a feel for what is overwatering, and what is underwatering, the two biggest killers.” It’s like CSI — Cabbage Slaughter Investigation.

One month later at home, the onions and potatoes are sprouting, the beans are running wild and the mint is trying to take over the world.

Of course, when it comes to really fending for ourselves, the best question to ask is: What would Darina Allen do? She had an ‘eat seasonally, eat locally’ approach long before it was fashionable. Her most recent book, Forgotten Skills of Cooking, suggests that growing our own beans might only be the start of it. Only two generations ago, Irish people knew not only how to produce their own food but how to kill it, cook it, make shoes and pianos from it. (I may have made that last bit up.)

I’m not up for making my own sausages — I don’t exactly have room for a pig — but I have a go at churning my own butter. Butter is like dust in our house, it ends up on everything, so it might be a good idea to have a Plan B in case creameries go out of business.

As per Darina’s step-by-step instructions, I whisk cream until it collapses and separates into buttermilk and fat. There is lots of faffing about with iced water and then comes the fun bit — squeezing the remaining buttermilk out of the fat. I thought the wet-compost test was bad but this is gross; slimy and sticky and I end up with butter behind one of my contact lenses. I now understand why Darina always wears those famous spectacles.

In the end, I’m not sure my finished product is right. It looks a bit pale and sickly, and doesn’t smell very nice. Perhaps my hands were too warm. Perhaps I cheated by not getting the cream from my own cow. I just have to hope that in the event of the apocalypse, Kerrygold is spared.

Sorrel – Rumex acetosaGrow Your Own Course
Scroll to top