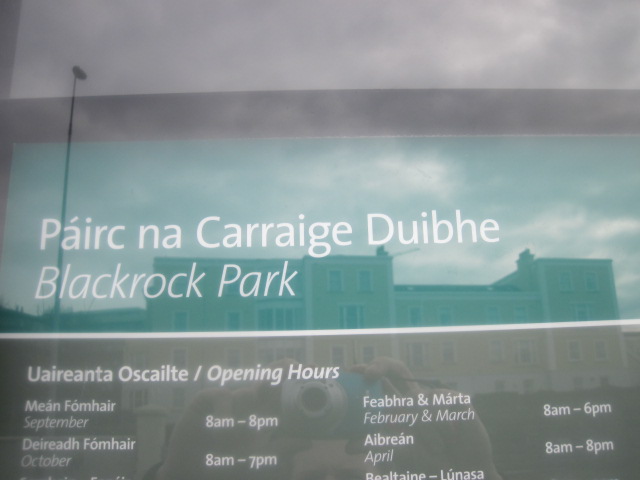 I used to pass this park heading southside of dublin, on towards Wicklow and beyond. I’d only ever seen the wee little island house from the roadside, but I never  took the time to go in. Sunday [28/02/10] I did just that.

I had this image in my head of the John Lennon video where he and Yoko row out to the little boat house and play the big white piano….. I was sorely mistaken.

The entrance in and car park looks fine, until one realises that there exists car parking charges Monday to Friday 8am – 7pm …. I’m guessing the park and playground is empty mid week.

I walked passed the GAA like sculpt and through the park… What I saw was an absolute disgrace. Graffiti on the memorial plaque, graffiti on the martello tower, the island house…. graffiti everywhere. The bandstand area was flooded and yes more graffiti on that too.

The planting: although there was evidence of works being done in cutting plants back and some new rose beds planted…. the parts that were in need of serious attention well out weighed the possible good work that was being done. The place simply looks neglected. And if The War Memorial Gardens in Islandbridge can show pristine…. this parks department has no excuse.

On a positive, the new playground area was being used. The overall layout is good and the walking/ cycle paths were being used. That said on a Sunday day where I could not find any parking in Dalkey or Dun Laoighre…. there were maybe three cars in this car park.

This is one of the worst parks I have ever visited and Dun Laoghaire Rathdown County Council should be ashamed…. and before any heirarchy even dream of speaking…. it take two minutes to clean a memorial plaque.