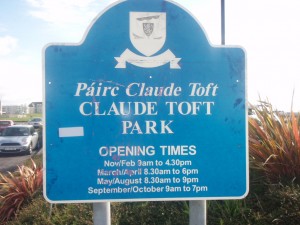 This has to be one of the most unusual ‘parks’ I have ever been to in my life. ‘An open area of ground with some facilities’, maybe.

On one side buildings, on the other the coastline  – in the middle, as if planning suggested all buildings be kept a minimum distance from the water – then later decided to call ‘that bit’ a park…. an almost landing strip was turned to lawn. Before I go any further – The Yuccas, phormiums and some other plants en mass did look well. Also I did see litter pickers out which was nice, but I only saw one litter bin.

I wasn’t impressed. There is little to zero information on the park courtesy of Galway City Council. Wikipedia for example tells me Claude Toft was a former Lord Mayor of Galway. The planting on the roadside/ walkways is of osmanthus [prickly] and cortaderia pampas grasses, a plant that could razor the hand of you. It is of course ground covered with pebble that overspills onto the ground and from my parks experience… pebbles and main roads don’t work so well.

The car park was poor; The play area [although commendable] looked very much the after-thought; The grey stone end nearer the city looked very out of place and contained only 3 picnic benches – but then when I loooked at it from the angle of the new buildings behind…. it fitted perfect?; The boundary between the residential areas was in parts like a dumping grounds – It simply wasn’t very well maintained at all and aesthetically poor. Put all of that together and then try and find any information on the internet? Not impressed. More than that children would find it extremely hard to kick a ball here – even if the grass was cut.

Shame on you Galway City Coucil Parks Department. The same Galway City Council that wish to plough a road through Terrylands Peoples Forest?  The peoples forest. The people think its a bad idea.