For the moment writer #8 is  Neil Kirrane of Edelmann PR 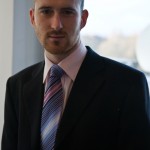 An outdoors enthusiast, Neill is a big fan of water and trees and can be found climbing a mountain most weekends.  Trees over water on the side of a mountain are a big favourite.

He plans to put in some serious garden time this summer. You can catch him in The Maharees. The land where gardens don’t grow.

I live in an apartment. A small one. Tiny. Like a little box. Nice though. Homely. A fireplace, some art; two original Picasso lithographs, a Miles Davis portrait and a mismatched assortment of paintings, posters and photographs from the four corners of the globe, France to Japan, Cambodia to South America and back home again. Piles of CDs, newspapers and books gather in the corners and either side of a seldom used fireplace.

Would I like a garden? Absolutely. A sprawling lush green forest with a small stream that rushes and races at first and then slows to a gentle flowing and swirling pace. I could catch trout with my bare hands, pick mango in the orchard and pull wild carrots from the rich soil.

As a munchkin, gardening and gardens meant wholly different things. Heaven and hell. One meant picking stones in preparation of my back garden. For days upon days. Who knew that a football pitch could be such a pain in the back. And head. And arms and knees. And back again. Gardening also involved me forgetting to water the plants. Then lying about it. Then hoping nobody would notice the missing rose bush. Or the dead lilies, cactus, or rhodedandrum. Once it even meant a football destroying a greenhouse. Again, lying about it. And hoping nobody would notice. In different order this time.

Raking and weeding and shovelling and planting. Struggling with a wheel barrow. Cursing when it tipped over and spilt soil everywhere. Cursing louder when it tipped wet cement. Hoping nobody would notice…either the cement or the cursing.

Gardens were different. Bright patches in the dark years. Hours upon hours upon hours of football. First to 50. Then next goal wins. Then penalties until it got too dark to see the ball and goal and teammate. Debating the offside rule. And we all cursed, the louder the better. With nobody listening who cared.

Gardens were grass stained jeans, and dirty green cons. Twigs in your hair, a torn tee-shirt, scratched arms. A big stick to beat a path to Feidhlim’s through the tropical man eating jungle that was the empty site next door. And beating that same path anew at the beginning of each summer. Planning expeditions that would follow the river to the sea on a great adventure, like BB’s Little Grey Men, and putting it on hold until after dinner. Or just reading the book again instead.

Lying with a disposable camera, motionless, in wait of the neighbourhood family of foxes, positive that this would be the money shot, wondering if fantastic Mr. Fox looked the same in person as in my head. National Geographic here I come. Giving up and expanding our tree house with Daire and Paul. Swiss Family Robinson. Robinson Crusoe. Launching water balloons at girls, then begging forgiveness. Then launching again. National Geographic can wait. So can forgiveness.

Unfortunately, Never Never Land was a myth. And today instead of a lush green forest or a tree house I have a concrete balcony. Where the soil quality is decidedly not deadly and definitely not rich.

And so mine is an indoor oasis. Two tomato plants sit in the window. Spindly little fellas. Tall and thin with illusions of grandeur. And every now and then I’m honoured with two or three bright red baby tomatoes. Once every six months. But they are delicious. Sweet and juicy and they taste all the better because they are the fruit of my labour. I guess that makes me a grower? Self-sustainable. A man of the earth who likes to let soil run through his fingers, sifting through it plucking out grit and stone and errant plastic. Nails cracked and knuckles skinned, a robin redbreast sits on his shoulder, his face weathered by the sun and caressed by the world’s winds and with a back that creaks beneath a chequered shirt and blue skies.

The tomato crop shares a west facing French window with an orchid. Very nice, but struggling because of a lack of sun. I think it may be on the way out. Unless I relocate it to a sunnier spot. Like Spain.

The pride and joy of this little copse of reality, however, is a Chinese Privet. An 18 year old bonsai. And it is breathtaking. 45 inches tall with a wonderfully curved trunk and overgrown foliage. I mist it every evening. Like telling a bedtime story to a child. Every week I soak the roots in rainwater. The leaves and branches should be pruned regularly but I’m a little careless in this. I like it shaggy and unkempt.

Allotments and greenhouses are the way of the future. Man will plant his own produce and nurture it and watch it grow and enjoy it all the more because it is his own creation. Spinach and carrots and spring onions. Rhubarb for dessert. Instead of dropping into a neighbour for a cup of sugar or some Barry’s tea, you borrow a turnip and some mint leaves. Sound for that. I’ll bring you over some spuds and strawberries in the morning. Sounds good no? No food miles or chemicals or cutting down rainforests. Just a cool garden.

I better build an extension to the balcony. It’s a great spot for water balloons.

small gardens, ideas, designs & what to dowhat is eating my plant…
Scroll to top