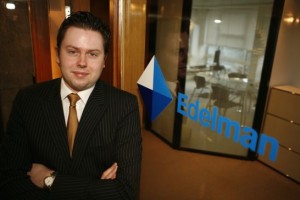 Donnchadh is a Senior Account Manager on Edelman’s Corporate Communications team. He has been with the company since 2003 and in his spare time is a raging heavy metal fan who currently has no time for gardening but does know where some interesting Gardens can be found……

Gardens from the sky…. I noted with intrigue that Neil O’Gorman included a Hot House Flowers video in his guest post. As a former colleague of Neill’s, I thought I’d have to go one better by including something that represents my own musical passions and thought immediately of cult UK heavy metal band ‘Lawnmower Deth.’  Then I remembered I was representing Edelman in this so chickened out a little and went for something more conservative in Guns N Roses ‘The Garden’ which also features Alice Cooper and Shannon Hoon and is a fine song. The Guns have actually recorded a few tracks with garden related titles or themes – Garden of Eden, In the Jungle, Bad Apples, New Rose (The Damned cover) and Rocket Queen, actually that last one isn’t in any way garden related (unless maybe in a potato or lettuce leaves sense ) but is such a fantastic track I thought I’d stick it in all the same. Infact maybe I’ll include Catcher in the Rye while I’m at it too. You can of course look up Lawnmower Deth of your own accord if you feel the need….

Anyway, before I sat down to write this I was trying to think about the last time I gave any thought to gardens or gardening. Surprisingly, it would appear it was just last week. I tend to spend far more time than I should in the office, which at the moment I guess is a nice complaint to have, but there is a definite relationship between that and the fact that the balcony in my apartment is as bleak looking as it was the day I moved in two years ago. This is despite plenty of intentions to green it up, at least a little bit. There’s even a Garden Centre within five minutes walk but I just haven’t managed to swing a few spare hours to go and make a start.

So one night last week, I was again in the office late, despairing about what I hadn’t got around to doing recently and the bleakness of my balcony again came to mind. I think the bright spring mornings have pushed it into my thinking a little bit more as its actually visible before I leave in the mornings now. So my thinking turned to plants and gardens and the time I’d spent in our family garden when I was younger as well as other gardens in the neighborhood. There were many fantastic gardens in my home town of Killarney of varying shapes and sizes ranging from small vegetable patches right up to the world famous Muckross Gardens in Killarney National Park. It occurred to me that many of the smaller residential gardens may have been gobbled up by the Celtic Tiger fueled development that has engulfed much of the town over the past fifteen years so I thought I’d have a look to see if I could see anything of their faith on Google Earth.

Unfortunately, Google Earth doesn’t do Killarney – at least on the free version anyway. Which is a shame but while I was looking my thoughts turned to my current neighborhood in Dublin. I’d looked up where I live before on Google Earth but this time I decided to see what kind of parks and gardens I could make out. It really provides a fascinating insight into what Irish people have in their Gardens, particularly the larger high walled ones that you are always curious about when walking past. Fair enough, it’s a bit of a one dimensional view but I was amazed at what some people have hidden away in their Gardens and back yards. For instance, I was enormously intrigued that a house not too far away from me seems to have an incredible maze in the shape of a shamrock tucked away behind its garden walls. Other things include ponds, swimming pools, little rivers and bridges, glass houses etc. The resolution isn’t fantastic but you zoom in a lot but you can make out things that might be out of the ordinary. It’s also a great way of having a peek into some of the Parks in our cities and towns, ones you’ve only passed but never bothered to wander into. Many of them are far bigger and more interesting than they look on the outside and when you know what they layout is like from the sky it makes going in a bit more interesting.

Until I get around to sorting my balcony out and get a bit more free time for actually walking in parks this may have to do me.

the spaghetti tree.. we had some chickens…
Scroll to top