For the moment writer #3 is Joy Redmond of flexitimers.com 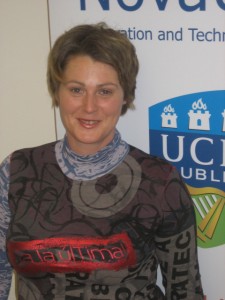 Joy Redmond is marketing & operations director of Flexitimers.com – a people-2-people platform for professional freelance and project work in Ireland. Joy has been working in the web industry (both agency and client side) since 1996. Joy was hiding out in academia between 2002-2007 but left to set up Flexitimers with Dervla Cunningham. Joy is delighted to be back working in a start-up, an environment in which she is most comfortable.

I was lucky because I grew up in beautiful garden not only because it had lots of interesting specimens but being one of six kids (typical Irish family like steps of stairs), the garden was where we spent most of our time. One of our favourite games was ‘who dies the best’ where each sibling would take turns dying more tragically that the next.  A lot of action took place around the weeping willow tree at the base of the front garden where many Cindy dolls were rescued and renegade action men were hanged. A voluptuous hydrangea was often necessary cover from irate motorists who’d been missiled with mud and rocks, yes typical behavour of a kid in a small town in late 70s so bored out of their mind that causing an accident was considered a result.

My mother used to say that a garden must have a number of ‘rooms’ each with their own character so we had a dining area enclosed by clematis covered trellises that when in flower told us summer was coming. The grass in the back garden was separated into two lawns by a row of cammelias that bloomed around Easter Egg time. The ‘yard’ was the patio area from the back door to the garage which catered for our evolving tastes – hoola hoops, rollerskates, bikes, basketball, the open theatre and then discos with spin the bottle.

Everyone had their favourite spot, Daddy’s was in the front garden (with the evening sun) in the hammock he’d bought in Mexico which was suspended between the two palm trees he’d planted for that reason. Mammy’s was lying in a lounger in full sun beside her rockery (very 80s!), Zoe lying on the floral print couch swing always reading, Alan being the only boy had to assert his masculinty by shooting coke cans with his pellet gun from his tree house in the huge oak tree, Eve spent most of her time grooming and coercing excerise from ‘Silver’ her bi-polar pony who never came good for pony rides at our parties. Jan (‘middle child’) behind the garage kicking the windsurfs with her back to us shouting out how much she hated us until Mammy bought her a puppy which taught her how to love. Amy and I (the little ones) used to spend hours beside the herb garden making mud pies for ‘Mr. Brown Thomas’ we’d say in our poshest Wexford accents.When we were grown up, my mother got a pond which pumped water to a waterfall that flowed down through the rockery. A few apple tress and a magnolia tree were planted with stone benches to sit and read in the shade. During her final summer, i have a vivid memory of her sitting back in her lounger with the sun shining eating a fresh chocolate from Leonidas with the sound of water trickling and she said it was ‘heaven.’I suppose if I was to sum up our garden, it was ‘lived in’ and alhough we’d lots of beautiful plants and flowers, we never felt we had to tiptoe or watch our step. It was first and foremost a place of fun and if a few shrubs got injured that didn’t really matter. We had spectacular water fights – commercial waterparks will never compare and usually ended up with someone (even a parent) getting so hyper and climbing onto the flat roof hosing us all down where there was nowhere to hide.My own garden is a little less spectacular. Three years ago, I bought a second hand house and inherited a 30 year mature garden which my father repeatedly tells me I’ve knocked 30k off its value by sheer neglect. I find it hard to muster the same enthusiasm as my two sons divided by five years and autism don’t have the same garden comraderie. A trampolene has proven a common ground as too I hope will the ‘hide’ that has been in construction for two years.  Now with the weather picking up, I’m due for my annual horticultural psychosis which will involve attacking the neglect with zeal, I’ll spray the roses, weed all the beds, reseed my wild flower border, rebirth my containers with pansies, tulips and lillies, untangle the 8 or so ciimbers I’ve ignored for months, prune the plum, apple and other trees, spray and cultivate the veg patch and start my beetroots, asparagus, peas, beans and lots of salad and herbs and so on until my hands and back are wrecked. My garden will look glorious for a week and so the cycle continues.

ardgillan demesne daffodil… what a day!
Scroll to top