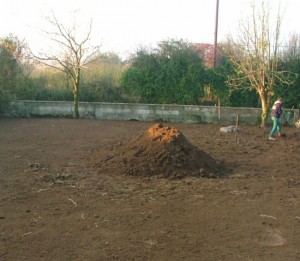 If you are buying topsoil – buyer beware – this really is a case of cheaper can often be more tearful than cheerful. Buy from a reputable source and before it is tipped in you’re driveway… jump in and have a rumage around.

The [generally speaking] golden rule for good topsoil is the darker the colour [ie. on a scale of concrete block to peat briquette – the closer it is to brown/ black the better]. The second rule is that it should not be overly clumpy and stick in lumps [too much] to the soles of your shoes when you walk on it [ie. it should be akin to walking on a sandy/ yet soily beach-ish], but colour generally tells so much.

Whilst I admit I do have a funny way of describing things, you can *see* what I’m saying…? 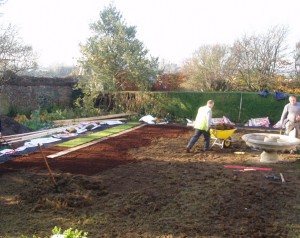 notice the difference in colour?

Poor soil, means longer labour hours and when the 20 tonne load – approximately 800 wheelbarrows – has to be moved by wheelbarrow and loaded by hand, believe me paying €50-100 euro more for you’re product, is [when you know what you’re getting] well worth it. As a rule of thumb, good soil should cost about €350-400 per load.

That said one can go a stage further and buy a graded mix topsoil or compost which comes in large bags. Expect to pay €150 per tonne approximately. This is a lot more expensive but – depending on the task at hand – it might just be the one for you. Sometimes 20 tonne is just too much and a load delivered – no matter the size – is a load delivered. That said, the pre bagged mix also allows you to calculate exactly where you want it placed and calculate.

In all things soil, remember it can often cost more to get it removed!

ranting and raving… ?thanks mate, that was nice of you!
Scroll to top