Blog
You are here: Home1 / Blog2 / All Posts3 / inspirational thoughts 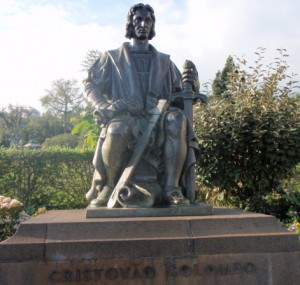 whilst the weather maybe a little rough in North Dublin today; trawling through a mountain of reference books seeking a solution to mindful serenity for a show garden design…. [ie. there is no problem just at the moment it doesn’t sit right, in my imagination] I stubled across this photograph of Christoper Columbus.

On the back I had written a quote by spanish philosopher Miguel de Unamuno; ‘Only he who attempts the absurd is capable of achieving the impossible.’

Sometimes attempting what can be only by some considered absurd in landscape design is frowned upon and laughed at…. when in fact it may also be considered genius. Will some laugh, nee be critical of my next design? or will it merit applause and acclaim…… ? Does it matter?